EXCLUSIVE: One Night In Miami and City On A Hill star Aldis Hodge will star with The Purge and The Tomorrow War‘s Edwin Hodge in a remake of the award winning Lei Zheng-directed Chinese film Parallel Forest. Kourosh Ahari will direct. The siblings will play brothers in the film, and they wrote the script with Jonathan Keasey (K-Sun and My Wife Hates Your Wife). They will also produce under their newly christened Hodge Brothers Productions banner.

Ahari is coming off the debut film The Night, a horror film distributed by IFC and just released on Hulu. it made history as the first U.S.-produced film to open in Iranian theaters in decades. 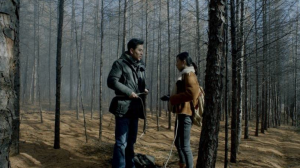 Parallel Forest is a grounded sci-fi thriller that follows the journey of Vanessa, a grief-stricken woman who mysteriously finds herself navigating between parallel spaces. While on a retreat with her husband and brother-in-law, and after suffering the loss of a child, she is faced with the threat of self destruction in order to regain the life she knew before her loss. These parallel gates may hold the key to releasing her grief or trapping her forever.

Rumble Riot made the RZA-directed Cut Throat City, currently playing on Netflix. Led by casting director Cynthia Huffman, the filmmakers are searching for their female lead to start production in the fall.

The Hodge Brothers first appeared onscreen together in Big Momma’s House, but this is the first time they’ve collaborated as writer/producers under their new production company Hodge Brothers Productions. Aldis Hodge is currently starring in Black Adam opposite Dwayne Johnson, and Edwin Hodge most recently wrapped The Tomorrow War opposite Chris Pratt.

Said the siblings: “This is just another chapter in the story of the Hodge Brothers. We’ve been on an amazing journey throughout our careers and working together in a creative capacity has always been our goal. We started together, we’re building together, and we’ll finish together.”

The Hodge Brothers are repped by Paradigm, The Priluck Company, and Ziffren Brittenham; Keasey is repped by Circle of Confusion and Hirsch Wallerstein; Ahari is repped by Rain Management Group, Paradigm and McKuin Frankel Whitehead.