There are 18 million unvaccinated people in California, according to the state’s vaccination dashboard. State health officials say it’s those residents who are driving the new surge in Covid-19 cases across the state.

On Wednesday, the California Department of Public Health released figures showing, in early July, case rates among unvaccinated residents were 600% higher than those among the vaccinated. What’s more, more than 90% of the patients hospitalized with Covid in the state are unvaccinated.

On July 4, the 7-day average number of cases per 100,000 was 4.6. On Wednesday, that number had risen to 12.7. Just 24 hours later, it had pushed to 14.2. The rise is being driven by the Delta variant spreading among unvaccinated. For the week of July 14-20, the average case rate among unvaccinated Californians was 20.7 per 100,000 per day. The average case rate among vaccinated Californians was significantly lower at 3.5 per 100,000 per day. That gap has likely widened even further as the overall average of cases per 100,000 has risen considerably since then.

In terms of raw new cases, Thursday’s count of 7,457 is the highest that number has been in five-and-a-half months, since February 10, 2021. And it’s reached that total even with about 55% of the state’s total population vaccinated.

The state’s test positivity rate — another trusted indicator of spread — was up over 20% in 7 days, from 5.1% to 6.2% on Thursday. On June 15, the day the state threw off Covid restrictions, it was .9%. What’s more, the line on the graph charting test positivity is becoming increasingly vertical. 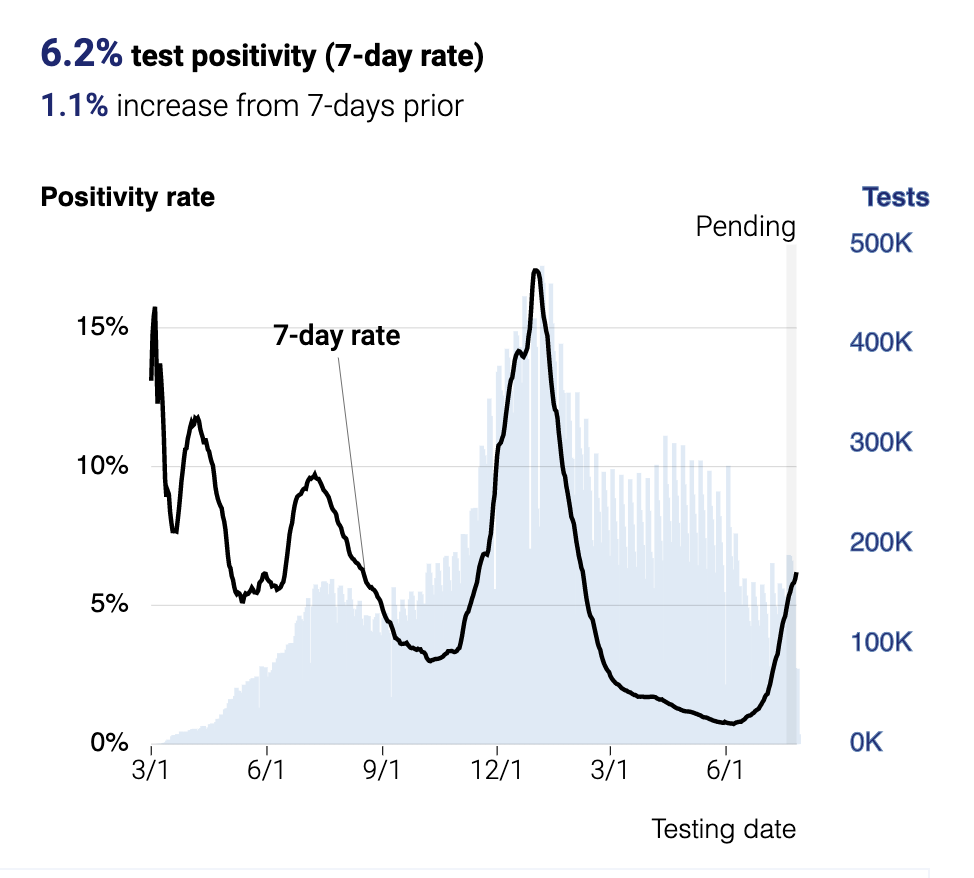 Covid-related hospitalizations, often called a lagging indicator, have also begun to rise. The number is increasing by a couple hundred a day and, at 3,977 on Wednesday, its the highest they’ve been in over four months. Likewise, ICU bed supply has slowly begun shrinking.