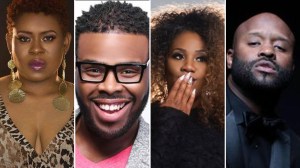 Sources tell Deadline that Luhrman was adamant about mixing big music stars and up-and-coming talent to create authenticity and sincere cultural engagement. In addition to Clark Jr., and Yola, he’s added emerging artist Shonka Dukureh in the role of Big Mama Thornton, as well Shannon Sanders and his Gospel team of Lenesha Randolph and Jordan Holland. Yola, Sanders, Randolph and Holland have been involved in the project since 2019, working with Baz from Nashville to Australia.

The new additions are joining Austin Butler as Elvis Presley, Tom Hanks as Colonel Tom Parker, and Olivia DeJonge as Priscilla Presley. Kelvin Harrison Jr. and Alton Mason were also recently added to the cast in the roles of B.B. King and Little Richard, respectively.

Written by Luhrman and Craig Pearce, the pic explores the life and music of the King, seen through the prism of his complicated relationship with his enigmatic manager, Parker. The story delves into the complex dynamic between Presley and Parker spanning more than 20 years, from Presley’s rise to fame to his unprecedented stardom, against the backdrop of the evolving cultural landscape and loss of innocence in America.

Clark Jr., who won the Grammy for Best Rock Song and Best Rock Performance for the song This Land, has released five studio albums and two live albums. In addition to contributing music for over 20 films, Clark Jr. made his film debut in John Sayles’ 2007 film Honeydripper, and has made cameos in such films as Made In America and Two Trains Runnin’. He is repped by W Management, Inc.

Yola, repped by Neverno Management and WME, released her debut album Walk Through Fire in 2019 and in the same year received four Grammy award nominations including Best New Artist. The album received accolades including Rolling Stone’s Artist You Need To Know and NPR Music’s Artist To Watch. Yola has performed on The Tonight Show Starring Jimmy Fallon, NPR’s Tiny Desk Concert, Jimmy Kimmel LIVE!, and was the first taping of Austin City Limits for its 46th season.

Dukureh, who is marking her big-screen acting debut with this film, has previously toured with Jamie Lidell and the Royal Pharaohs and appeared on albums from Mike Farris and Ashley Cleveland. Sanders is a double Grammy winner for producing Jonny Lang’s 2006’s Best Gospel Album Turn Around and India Arie’s 2003 Best R&B Album Voyage To India. Randolph is Grammy-nominated for her work on 2017’s Got Soul and 2019’s Brighter Days, both nominated for Best Contemporary Blues Album. Holland, a classically trained vocalist, released her debut music project Acoustic Expressions: The Recital Project in 2016.