Applications for on-location filming in and around Los Angeles fell by nearly 25% in December, according to FilmLA, the city and county’s film permit office. Some 143 permits were issued during the week before Christmas, 58 during the week of the holiday and 50 the week of New Year’s.

With just 21 working days in December, FilmLA released an average of just 29 film permits per day – the lowest daily output since August.

Television production comprised 27% of permits issued in December, but only a handful of TV series started shooting locally last month, including Ghosts and The 3 of Us (CBS), Insecure (HBO), Tacoma FD (HBO Max) and The L Word: Generation Q (Showtime).

Feature film production made up just 6% of permits issued last month. A total of 26 feature films, largely independents, began shooting in L.A. in December, including Monstrous, Slayers and This Land. 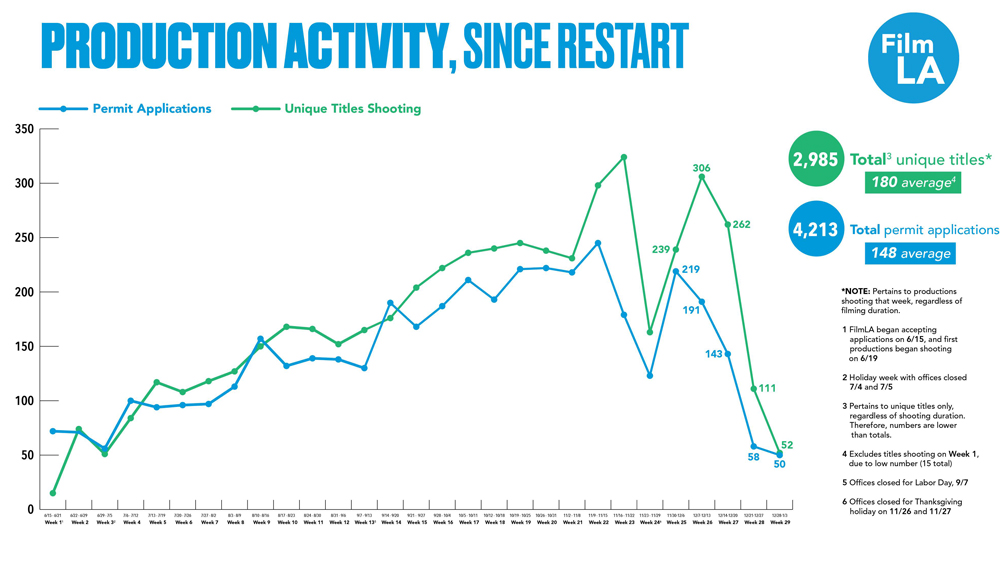 Analysts tied the drop in production to voluntary industry efforts to stop the Covid-19 surge. Film production has remained permissible in the county since June, when the industry-wide lockdown was lifted, subject to extensive workplace health regulations, including routine employee screening and testing, environmental sanitation and zone-based set-access control.

But on December 24, the Los Angeles County Department of Public Health urged the film industry to consider pausing production for a few weeks amid the ongoing surge. “Highly invested in efforts to keep cast, crew and communities safe, and having already begun dialing activity back, an extended holiday hiatus began,” FilmLA noted. CBS Studios, Warner Bros. TV, Universal Television, Disney Television Studios and Sony Pictures Television all indicated recently that they were pausing production until at least mid-January.

SAG-AFTRA and the Producers Guild of America, meanwhile, further recommended that on-set commercial production be temporarily paused in Southern California.

“The industry has been extraordinarily responsible throughout the time of the pandemic, as demonstrated by their recent actions during the rise in cases of Covid-19 and embrace of strict safety protocols,” said FilmLA president Paul Audley.

Over the past 29 weeks, FilmLA has processed approximately 4,213 film permit applications spanning 2,985 unique projects. Permit applications declined 24.9% from November levels to 613 permits in December – the second straight month those requests have dropped. In November, monthly activity slipped 7.6% from October levels to 813 permits.