We now pronounce you series and premiere date. Lifetime has set January 13 for the three-hour Season 12 debut of its reality-nuptials stalwart Married at First Sight, which has relocated to Atlanta for 2021. 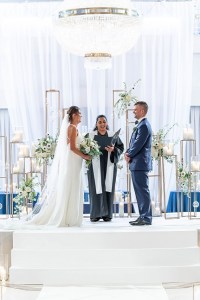 Here is the logline for Season 12: Ten brave-but-loveless singles meet their new spouse at the altar and enter a legally binding marriage at first sight. With one groom pushing 40 and another who has been divorced — both MAFS firsts — new insights are brought to a journey that is always full of high-stakes. While some marriages will survive, one couple confronts a bombshell that no one saw coming.

As the season continues, each week will feature two-hour episodes and capture each couple’s emotional journey as they go from wedding to honeymoon, early nesting and eventually dealing with the daily struggles of working on their marriage. After several weeks together, each couple must make a decision: Do they remain together for a happily ever after or decide to divorce and go their separate ways?