The fallout from Dave Chappelle’s harsh words about trans and LGBTQ+ communities in his Netflix special The Closer crested Wednesday with a walkout and rally that saw more than 100 protesters and allies attend, and present their “list of asks” to the company in the wake of the controversy.

B. Pagels-Minor, the Netflix employee fired last week from the streamer for allegedly leaking financial information to the media about Chappelle’s comedy special, was among those participating at the company’s Vine Street offices near its Sunset Boulevard headquarters.

Pagels-Minor told Deadline on the sidelines of the rally that they did not leak information to the media. “I compiled a series of data, I’m a data person, and I shared it with a lot of people internally,” Pagels-Minor said. “If they’re going to fire me, they’re going to have to fire a lot of people,” the former staffer added, noting that they were never directly informed as part of their employment contract about what they could and could not distribute.

Netflix Issues Statement About Trans Employee Walkout: 'We Have Much More Work To Do'

They said they had no current plans to take legal action. 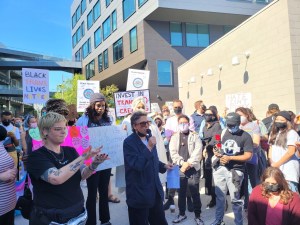 Filmmaker Ashlee Marie Preston, who organized today’s rally, was also among the speakers along with Transparent creator Joey Soloway and RuPaul’s Drag Race star Eureka O’Hara at the event, which comes two weeks after the launch of Chappelle’s The Closer and the subsequent fallout.

“Dave Chappelle doesn’t get to take the light from this moment,” Preston told the rally crowd, adding that organizers reached out to Chappelle but were rebuffed. Other speakers called on the cheering crowd to cancel their Netflix subscriptions.

“Trans people are in the middle of a Holocaust,” Soloway told the crowd, adding, “Misogyny is gender violence” and calling out Chappelle directly.

Soloway also demanded that a trans person be placed on “the Netflix f*cking board.” Preston said at the rally that organizers planned to call out board members if there is not a change towards “equity” and “leadership options.”

At one point early in the walkout, a Chappelle supporter tried to crash the speakers at the mic. Later, there was pushing and shoving after another Chappelle fan, carrying a sign that said “Dave is funny,” tried to push over people to get to the front.

One protesting Netflix staffer said “I’m sorry, I can’t speak to you” when approached by Deadline.

Organizers read read out a “list of asks” that will be presented to Netflix’s co-CEO Ted Sarandos. Here they are:

* A new fund to specifically develop trans and non-binary talent

“The difference between tokenism and opportunity is the ability to access one’s voice,” Preston told Deadline today ahead of the rally, emphasizing the need for “economic justice.”

Even the official Netflix Twitter feed for “LGBTQ+ storytelling” took to the Hollywood streets today.

Netflix brass like co-CEO Ted Sarandos initially defended the Chappelle special against claims of transphobia and hate speech, saying it did not “cross the line” on hate speech even as trans staffers, past and present, and organizations such as GLAAD and National Black Justice Coalition condemned Chappelle’s comments and the streamer’s embrace of the superstar comedian’s remarks.

Another Netflix superstar, Hannah Gadsby, cut straight to the chase and cause on October 15 in response to the corporate reaction, or lack thereof. “You didn’t pay me nearly enough to deal with the real world consequences of the hate speech dog whistling you refuse to acknowledge, Ted,” wrote Gadsby on social media last week. “F**k you and your amoral algorithm cult…”

As well as rare public hot water, the controversy has seen a crisis of culture within the streamer and resulted in temporary suspensions, at least one firing and a sense of betrayal among some employees.

On Tuesday, after the all-important quarterly earnings report came out, Sarandos reached out to the media with some clearly well-rehearsed lines in the hopes of defusing the situation – which is one of the first times Netflix has felt a backlash of any sort since it became the dominant force in Hollywood.

“I screwed up the internal communication — and I don’t mean just mechanically,” he said. “I feel I should’ve made sure to recognize that a group of our employees was hurting very badly from the decision made, and I should’ve recognized upfront before going into a rationalization of anything the pain they were going through. I say that because I respect them deeply, and I love the contribution they have at Netflix. They were hurting, and I should’ve recognized that first.”

In contrast to Sarandos, fellow co-CEO Reed Hastings hasn’t retreated an inch over the Chappelle controversy or the disclosure of financial information the past few weeks.

On October 18, Hastings steadfastly refused to discuss either matters during an appearance on philanthropy at the well-heeled Milken Conference While silence is his public face, an infuriated Hastings is the primary force behind stomping out any leaks of internal Netflix discussion, financial information of payments to talent like Chappelle (who got over $24 million for The Closer) and more, we’ve heard.

To that end, staffers who are participating in today’s trans walk-out have been told they can exercise their right to protest, but they are under no circumstances to knowingly talk to the press — even while on the streets of Hollywood on Wednesday morning

In fact, any edict has gone out to units within the streamer that anyone who leaks will fired immediately, as occurred to the staffer who revealed details to Bloomberg last week. More so, the company is indicating it will strictly enforce NDAs, including court action, a number of sources tell us

Publicly, the streamer is putting on a much more benign face.

“We value our trans colleagues and allies, and understand the deep hurt that’s been caused,” a Netflix spokesperson said Wednesday before the walk out. “We respect the decision of any employee who chooses to walk out, and recognize we have much more work to do both within Netflix and in our content.”

And the staffers on the street agree.