Editors note: Deadline’s Read the Screenplay series debuts and celebrates the scripts of films that will be factors in this year’s movie awards race. Spoiler Alert: This story contains major plot details of MGM/UAR’s No Time to Die.

When it came time to crafting a story for No Time to Die, the veteran producers and screenwriters behind the James Bond films knew they needed to deliver something that not only offered fresh territory for the increasingly formula-bucking 007 franchise, but also to craft a spectacular exit for actor Daniel Craig, who’s redefined Ian Fleming’s venerable character for the modern era, in his final appearance.

After Craig’s four previous outings, which charted Bond’s emotional progression from his earliest missions onward in ways the previous films had not, the creative team needed to land on what the next step in 007’s evolution would be, having grown from his deep love, bitter betrayal and tragic loss of Vesper Lynd (Eva Green) in Casino Royale to contemplating a lasting, trusting relationship with Madeleine Swann (Léa Seydoux) by the end of Spectre.

“There was the debate on how we continue telling the love story and explore the themes that have become so pivotal across the Daniel Craig movies,” says executive producer Barbara Broccoli. “If Bond is going to commit to a relationship, this throws up so many emotional challenges for him, so trust is the biggest theme in this movie. Making an emotional commitment with someone is very difficult because of his history with attachments, and then betrayal being a big part of the break-up of those attachments.”

Longtime screenwriting team Neal Purvis and Robert Wade, who have two decades of experience writing Bond films, recognized the potential in following Bond’s romantic progression to its conclusion. “Bond realized he could never do his job if he made himself vulnerable in that way — that’s why in the aftermath of Casino he rejected love and shielded himself from falling for another woman.” Says Purvis. “But in the case of Madeleine, she is the daughter of an assassin and is therefore the one person who might understand the life that he has had. So he puts his trust in her and that’s the key thing for him. Love and trust are intertwined and he’s making himself very vulnerable.”

“He believes that he should be happy being retired but there is something missing,” adds Wade. “He is fishing and drinking and sunning himself, but he needs more.”

“When trouble comes knocking it is something he welcomes; he can take up the challenge again,” says Purvis.

Adding to the creative mix was the perspective of director Cary Joji Fukunaga, the first American to helm a Bond film. “Much of our discussion was around how we make this film feel of the time, but also of the universe of Bond, which is never really specific to a time,” says Fukunaga. “You also want to bring something new to the story, and also you want to honor all the Bond films in terms of leitmotifs and expectations.”

Actress-screenwriter Phoebe Waller-Bridge provided another jolt of the new, adding her signature wit and a female perspective, among other elements, to the screenplay. “Phoebe had a big impact on the script and we love working with her,” says Broccoli.

“All the writers made a contribution and Cary tried to incorporate as much of everybody’s work as possible. The story is very complicated, but it is told in a very understandable manner. The revelations are fascinating.”

Then there was the film’s legitimately shocking dénouement, which definitively concluded Craig’s tenure. “The thing about how to make it work was, as usual, the devil’s in the details,” says executive producer Michael G. Wilson. “If he’s going to meet his demise it can’t really be a suicide mission, although he always does risk his life and take those kinds of risks, but also it couldn’t be a random act where he’s just killed arbitrarily. It had to be meaningful. Cary and writers had to come up with the solution that we felt was appropriate, and [Daniel Craig] thought was appropriate.”

“With No Time to Die, the themes are as big as you can go,” says Craig, who as executive producer and star also had considerable say in the story. “That’s how it is with Bond. If this isn’t the time to use the expression ‘Go big or go home’ in a Bond movie, I don’t know when is the right time to use it.”

Click below to read the script for the film, with MGM and United Artists Releasing rolled out worldwide beginning on October after being delayed because of the pandemic. The film has grossed $774 million at the global box office and has been picking up noms this awards season for the Billie Eilish-sung theme song (it already won the Golden Globe) as well as for its crafts teams from stunts (SAG Awards nom) to visual effects (VES Award and Critics Choice noms) and production design (an ADG Award nom). 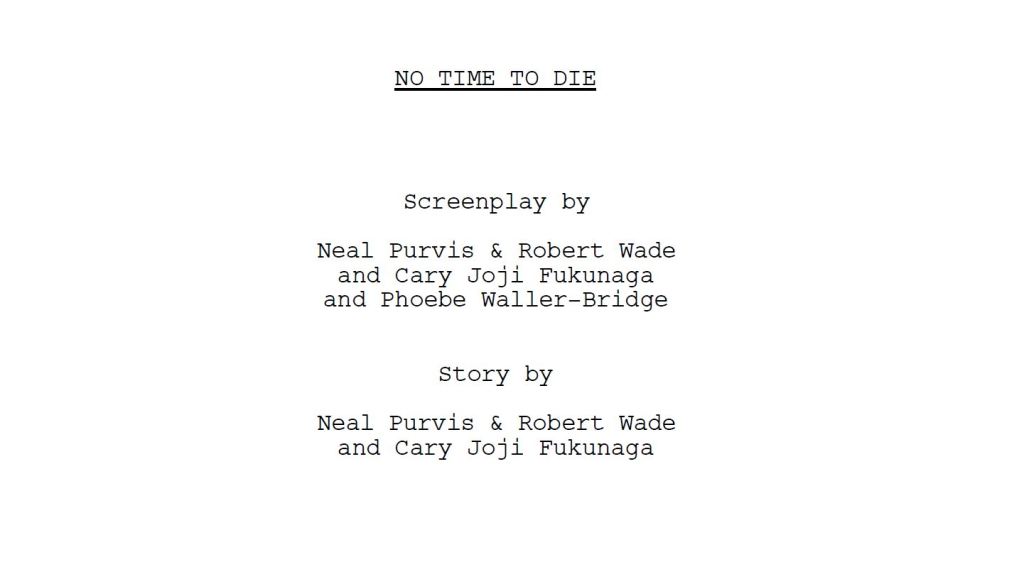 More from this Story Arc