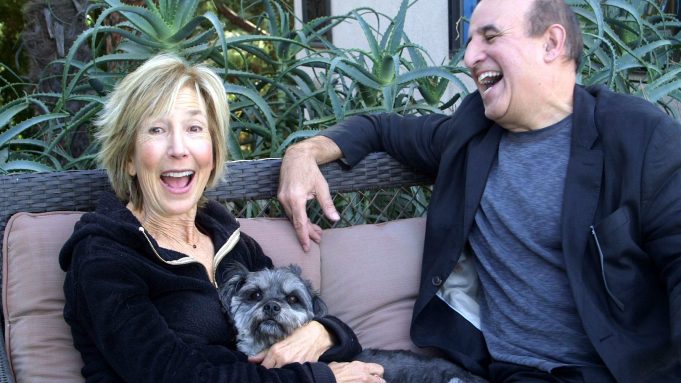 EXCLUSIVE: Buffalo 8 has announced that it will release Ruben Pla’s feature directorial debut The Horror Crowd on digital and VOD on September 2nd.

The Horror Crowd has played to film festivals like FrightFest and Grimmfest and has earned several festival honors as the Santa Fe Film Festival’s Best Director, Best Horror Feature from the London Independent Film Festival and Best Documentary at the Seattle Film Festival. Buffalo 8’s Head of Distribution Nikki Stier Justice negotiated the film’s acquisition on behalf off the company, with Eric Miles of Miles Media Entertainment on behalf of the filmmakers.

EXCLUSIVE: Sana Soni has joined the digital distributor Giant Pictures as Director of Sales & Distribution. In this new role, she will be responsible for all sales and rights-out monetization across Giant’s rapidly growing content portfolio and client roster, which includes Tribeca Enterprises, Participant, Topic Studios, Passion River, Indican Pictures, Magic Light Pictures and more. Soni will also work across Giant’s newly acquired specialty label Drafthouse Films and its upcoming slate of theatrical releases. She comes to the company after serving as the Director of Sales at Screen Media Ventures (formerly 1091 Pictures). 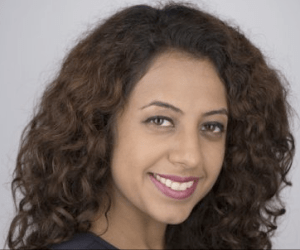 During her decade spent working in sales and distribution, Soni has played a key role in increasing visibility for independent film. She has spearheaded hundreds of sales, both in the United States and during her time in London at Signature Entertainment, where she served as Sales Executive co-managing DVD, theatrical, and digital distribution for a wide variety of films.

“As Giant Pictures continues to grow, having an executive who understands the streaming market and the specific tastes of our audience is key to our success,” said General Manager Nick Savva. “Sana embodies that perfectly and we are excited to have her on our team leading the charge and bringing new content to digital platforms.”

“I’m absolutely thrilled to be joining the small but powerful Giant Pictures team,” added Soni. “Giant’s combination of streaming and traditional modes of distribution is unique and their strong ties to brands like Tribeca and Drafthouse continue to bring critic and fan favorite titles alike. I am privileged to be working closely with this stellar team.”

EXCLUSIVE: The International Documentary Association has named Paige Bethmann (Remaining Native), Chelsea Hernandez (The Untitled 19th* News Film) and Zippy Kimundu (The White Doctor) as the recipients of this year’s Logan Elevate Grants, with a total of $30,000 going to the trio. 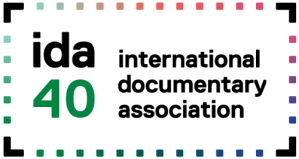 The grant supported by the Jonathan Logan Family Foundation has bee providing funds to emerging women and non-binary filmmakers of color that are directing feature-length journalistic documentary films since 2018. It allows for story consulting for grantees, also funding educational programming throughout the year.

More information about the 2022 grantees and their projects can be found here.

EXCLUSIVE: Elijah Rodriguez (Sicario: Day of the Soldado) and Mia Sanchez (Memory) have signed on to star alongside Rudy Youngblood and Antonio Jaramillo in Verloren Productions’ drama Macho!, based on the book by Victor Villaseñor. 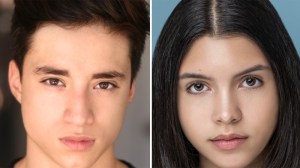 The coming-of-age tale taking place during the 1960s centers on Roberto Garcia (Rodriguez), who at age 17, already has big dreams of making his fortune, building a family, and gaining the respect of his community. With ambition to burn and a passion to prove his manhood, Roberto takes the dangerous journey north, crossing the Mexican border to pick fruit in the “golden fields” of California. It is said that a good man can make more money there in a week than in an entire year in the mountains of Michoacán, his home. With dreams that overshadow harsh realities, Roberto is unprepared for the jammed boxcars and bolted trucks that carry undervalued migrant workers through the searing desert to long days of harsh labor. The film will examine the brutality of migrant labor, as well as Cesar Chavez’s efforts to unionize workers, offering vivid portrayal of the immigrant experience through the eyes of a brave young man who bids goodbye to everything he knows to follow his dreams.

Verloren Productions Founder Walt Perez adapted the screenplay and will produce alongside Soren Odom, Melanie Tirado and Ralph Esparza. Jaime Peralta is serving as associate producer, with production to kick off next spring. Rodriguez is repped by Amsel, Eisenstadt, Frazier & Hinojosa and Artistic Endeavors; Sanchez by Lil Angels Unlimited and Innovative Artists.

EXCLUSIVE: Sean Whalen (The People Under the Stairs) and Richard Tyson (Black Hawk Down) have joined the real-life domestic abuse drama Finding Nicole, based on the Chris Cuomo-fronted Inside Evil episode Til Death Do Us Part. 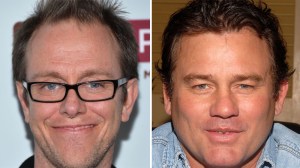 Whalen is repped by Metropolitan Talent Agency and Advanced Management; Tyson by American Artists Group Talent Agency. The Wallens are with The Williamson Management Company and Dobreff & Dobreff Law.

EXCLUSIVE: Gattlin Griffith (The Boys), Katie Burgess (The Jurassic Games), LaRonn Marzett (Birdie) and Ricardo Hurtado (Malibu Rescue) will topline the coming-of-age pic What Rhymes With Reason, which heads into production in September.

The film from director Kyle Roberts centers around high school senior Jesse Brandt (Griffith), who loses himself in the darkness of depression. In an attempt to find direction, he and his friends (including one played by Hurtado) embark on a quest from his father (Bart Johnson) to find a legendary landmark hidden in the Oklahoma wilderness.

The creatives behind What Rhymes With Reason have partnered with Oklahoma’s 988 Mental Health Lifeline to spotlight the new resource, providing an easy-to-remember three-digit number to replace the 11-digit National Suicide Prevention Lifeline. The 988 Mental Health Lifeline operates 24/7/365 and offers services for mental health crisis calls, with licensed operators and certified health crisis specialists answering them, and dispatching local services and mobile crisis teams as needed.

Griffith is represented by Curtis Talent Management; Burgess by Reel Talent Studio in Oklahoma and Mitch Clem Management; Marzett by People Store and Triniti Management; and Hurtado by CAA and Untitled Entertainment. 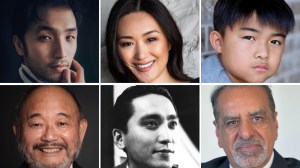 The film currently in production centers on Neil Bardo (McLaughlin), a commercial real estate inspector and committed family man who accidentally injures his only son. To keep his marriage to Elena (Kebbel) intact while facing crushing medical costs, Neil begs for additional shifts from his mercenary boss, Garrison (Rossi). While inspecting an abandoned government facility, he’s confronted by nightmarish visions that now begin infiltrating his waking life. Desperate for answers, Neil enlists the help of ex-girlfriend turned journalist Naomi (Ishikawa). And together they unravel the mystery of the covert government site and its soul-bending experiments.

Site‘s story examines historical incidents and atrocities that took place in China during WWII. An, Wang and Jung will respectively play Jian, Xifeng and Guang, members of a Chinese family who struggle against a ruthless military general (Otaguro). Kusatsu and Raz will portray former American military personnel, Ronith Nanda and Kenneth Tanaka. The film’s producers are Kelly Hayes and Benjamin Cooke. Yvonne Supangkat is exec producing the pic, slated for release in 2023, for Entelekey Media.

An is repped by CAA and Auckland Actors in New Zealand; Wang by Buchwald and AFA Prime Talent Media; Jung by East Coast Talent Agency in Georgia; Kusatsu by Artists & Representatives and DPN; Otaguro by Miramar Talent Agency and Sheer Talent Management; and Raz by Heartrock Pictures in the UK. 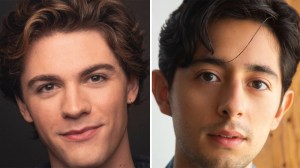 Ganymede tells the story of Lee Fletcher IV, a high school senior and third generation heir to a local political dynasty in a small town in the South. When he develops a crush on his openly gay classmate, Lee finds himself stalked by a grotesque, faceless creature that increasingly inhabits his thoughts and threatens physical harm. The film is being produced by Stephen Stanley (What Lies Below), Kevin Greene and Mark Goldberg, in association with Iris Indie International. Geneva Wasserman of dentsu’s The Story Lab (Spiderhead), J Craig Gordon, Kevin Stansberry and Sean Fernald are serving as EPs. The filmmakers are looking at a 2023 festival debut, with the title currently up for sales in all territories. 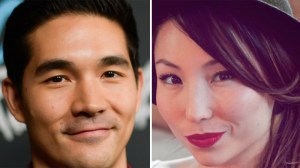 The indie follows Laela Sagan and Colin Lang, two high school sweethearts separated during the 1998 riots in Jakarta, Indonesia, who unexpectedly reunite in L.A. for one day 23 years later. A sculptor at the top of her game, Laela travels the world engaging in art and philanthropy but will never admit to her loneliness or its impact on her work. Meanwhile, Colin is packing up his house in East L.A. and finalizing his family’s move to Pennsylvania, where he’ll become a stay-at-home dad and support his wife’s career. Despite not wanting to relocate, he’d rather leave than be left behind. As the star-crossed lovers examine the choices that led them down their separate paths and back again, Laela and Colin must decide if they’re still in love or just nostalgic for the past.

EXCLUSIVE: Gravitas Ventures has acquired worldwide distribution rights to the Las Vegas sex trafficking thriller Beyond the Neon, with plans to release it across VOD platforms in October. 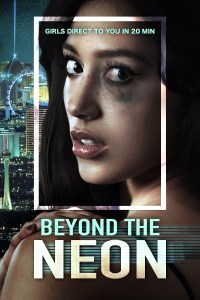 The film from director Larry A. McLean (Vanished) stars YouTube personality Joey Salads—who plays a reckless version of himself—watching as he and his apprehensive film crew plunge into the high-stakes escort system to perform a dangerous “social experiment” on the Las Vegas strip. While the story is fictional, it’s based on true accounts. The project was developed over three years of undercover research in the Las Vegas area consulted by law enforcement, anti-trafficking organizations, and an advisory committee of American sex trafficking survivors assembled by Magnum Opus Pictures.

Beyond the Neon was produced by Magnum Opus Pictures’ Woodrow Wilson Hancock III and Madero Films, with Christopher Thellas exec producing the pic scripted by Hancock and Marisa Dzintars. The film was financed by cryptocurrency and will get its own set of charitable NFTs via a partnership with Phantasma blockchain, which will fund initiatives assisting those affected by American trafficking.

Forbearance is the story of a couple in crisis. With their marriage teetering on the edge of divorce, a teacher, Callie (Juli Tapken), and her factory worker husband, Josh (Travis Hancock), have their world rocked when Josh is suddenly diagnosed with terminal cancer. Forced to reckon with Josh’s fractured relationship with their son, Jonah (Cedric Gegel), Josh and Callie must overcome the effects of cancer, the tension between Callie and Josh’s best friend Bo (Paul Logan), and what the world will look like for Callie when it has all been turned upside down.

The film penned by actor, screenwriter and cancer survivor Gegel was produced by Read, Mark H Stewart, Jessica Dunham and Vernon Wells, with the latter also playing a role on screen. Freestyle Digital Media negotiated the deal to acquire the pic directly with Glen Reynolds of Circus Road Films. Watch the trailer for Forbearance below.