EXCLUSIVE: It only took 33 years, but director/producer Ivan Reitman, Arnold Schwarzenegger and Danny DeVito have found a way to sequelize Twins.. They’ve enlisted Tracy Morgan to play a third and long lost sibling.  Triplets will shoot January in Boston, as the two unlikely  brothers Julian (Schwarzenegger) and Vincent (DeVito) find they are part of a trio.  This immediately becomes a hot project in the Toronto Film Festival market, which like last year is mostly playing out in virtual fashion. Script is by Dylan Dawson & Lucas Kavner. CAA Media Finance will rep North America and Rocket Science is handling international sales. They are about to send out a sizzle reel with the trio to potential buyers.

“Twins was quite successful, and some years after, this whole thing started with Arnold meeting Eddie Murphy, and the suggestion came from one of them,” Reitman told Deadline. “It was, ‘I should be a triplet, that could be a very funny comedy.’ We started a script with Eddie, and after the success he had with Amazon Prime on Coming 2 America, he got himself booked up heavily. And we knew we were going to make it at the beginning of next year. I’d been good friends with Tracy Morgan for a long time and always thought he was one of the funniest men in the world. I thought he would make a terrific triplet, and we rewrote the whole script for him. Now, we’ll go out and try and put the money together and get it made.”

The original was a big hit for Universal — $216 million global gross — but Reitman said that the terms called for a reversion of rights if the sequel wasn’t made in a certain amount of time. 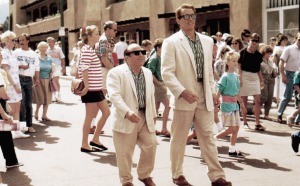 “We had this fabulous deal we made with Tom Pollock, who wound up being my partner at Montecito Pictures,” Reitman said. “It was his first picture as the chairman of Universal. He loved the script and really believed in it. We decided we would do this where there was very little money upfront. We made the movie for $15 million. But it came with a lot of gross and so we ended up doing very well. In terms of future rights, Universal had very restrictive secondary rights in terms of sequels. They had to act on it very quickly, which they didn’t, because we hadn’t really developed it.”

Here is the premise: “Secretly, there was a third baby born, a Black baby, who hasn’t been in touch with his siblings,” Reitman shared. “They don’t know each other and very early in the movie they meet and it’s how they achieve a bond together after all these years. It’s really a film about family and, no matter how different we all are, we have to learn to get along. These guys have great chemistry together, and you can see that in the reel, and how much energy they bring out in each other.”

Reitman said Boston looks like the perfect venue: “We need the winter and my guess is we probably shoot in Boston. It looks great and has mountains nearby, and has a good tax deal. We’re dealing with this as an independent, and we want to keep the costs low. It worked out very well for us in Twins, I see no reason not to do that here.”

While Reitman has been busy producing a reboot of his comedy classic Ghostbusters — son Jason Reitman took the helm of Ghostbusters: Afterlife that Sony Pictures bows November 19 — he was eager to get back behind the camera and replicate what he said was a most pleasant experience.

“I haven’t directed in a couple years, but Arnold kept saying, ‘c’mon, we had such a great time.’ I just called him in Budapest and he’s so excited to see how people respond to the reel as we send it out. The initial reaction has been very strong, and how young Arnold and Danny look and how great the chemistry is with Tracy. I had a great time doing the first one, and this is going to be fun.”

The Montecito Picture Company is among the film’s producers. Schwarzenegger is repped by UTA, Reitman, DeVito and Morgan are CAA and Dawson is Mosaic and Kavner is repped by Gotham Group.